The art of Taijiquan 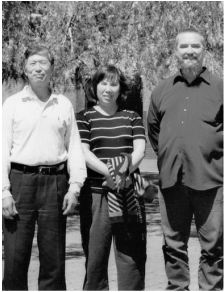 (L) Sifu Chau Chiu Kwan, Si-Mu Helen Chau and John
Darren: John, you spend a lot of time ensuring student have a sound understanding of fundamental principles, can you tell us why that is?

It is vitally important that we consciously introduce and internalise the Tai Chi Chuan principles into our body. Otherwise we are doing an “empty form” with little meaning, devoid of substance our efforts will produce little, if any, lasting benefit, becoming discouraged we will be led far from the door-way and promise of Taichichuan.

Darren: Can you give us an example of the teaching method at your school.

John: The first idea in learning the Tai Chi body is to begin to recognise and then to let go of tension and relax completely. In action, we do this through practicing correct body posture. Correct body posture is the healthy alignment and movement of one's skeletal framework.

This is done in accordance with fundamental Tai Chi principles whilst learning to elongate the tissues and open up all the body’s joints and relieving obstructions to movement through a series of fundamental practices.

Darren: John, can you tell us about your background in Tai Chi Chuan?

John: I first began my journey into Chinese martial arts back in the 1970s. My first teacher was Sifu Chau Chui Kwan, or Colin Chau. I learned the Lama style - a long arm system of boxing originating from Tibetan monks and based on the action of a crane and an ape with striking directed at the veins and arteries. Sifu Chau also taught me internal aspects from this system that I still practice each morning along with the observances in relation to the practice he taught all those years ago. 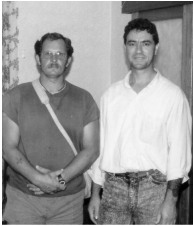 (L) Sifu Eric Fitzgerald and John
Darren: How did you become interested in Tai Chi Chuan and who did you learn from?

John: It was the internal practices I learned from Sifu Chau and the few available writings of Professor Cheng Man-ching that sparked my interest in Tai Chi Chuan to the point I wanted to focus entirely on Tai Chi Chuan.

Sifu Chau was also proficient in Wu style Tai Chi Chuan and I asked if he would teach me. He showed me the opening movements but after some thought Sifu Chau directed me to another of his senior students and my senior classmate, Eric Fitzgerald, who had practiced Tai Chi Chuan in Malaysia for some years.

I remember going to meet Si-Hing Sifu Fitzgerald at his home in Sydney NSW. At the end of our meeting I asked if he could teach me the 37-posture form fashioned by Cheng Man Ching. Sifu Fitzgerald said yes, but I would have to learn the whole Yang system he taught, not just one form though, I only ever wanted to learn the Yang style 37-posture form. I agreed and so I began to learn from Sifu Eric. Any modicum of maturity I may have gained in my practice of Tai Chi Chuan over the years is as a direct result of Sifu Fitzgerald teachings.

From memory, I received my teaching certificate from the Australian Thai Keik Association in 1982. My certificate was signed by both Sifu Chau Chui Kwan and Sifu Eric Fitzgerald..

​It is vitally important that we consciously introduce and internalise the Tai Chi Chuan principles into our body. 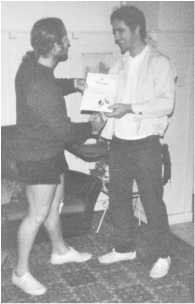 ​Darren: What about Tai Chi Chuan as a martial art?

John: As I was taught it, Tai Chi Chuan is a very effective martial art based in the soft and yielding subduing to the hard and unyielding and the principle of four ounces deflecting a thousand pounds. These are not easy concepts to understand and much more difficult to put into practice.

I advise when there is the option of walking away we should take it, it’s a healthy productive martial strategy, and once mastered, is a superior technique and good Tai Chi Chuan.

I think, we are short-changing ourselves however, if we view the practice and study of Tai Chi Chuan through a narrow lens, Tai Chi Chuan is a very well rounded and highly sophisticated practice incorporating health, self-defence, philosophy and self-cultivation.

In a nutshell, there is the civil and the martial, we shouldn’t neglect these nor separate or compartmentalise them. They are all inter-related and are all strings to the one bow. It is the practice and application of principle that unifies all the four areas of our practice.

When teaching Tai Chi Chuan, the martial function as I see it, is simply an inherent part of the structure within the form, the essential ingredient and determining factor however, is mind-intent. A good teacher should at least know and demonstrate how the fundamental 13 postures, energies if you will,  from the Tai Chi Chuan classics relates to martial application so as to bring clear focus to our practice, this is equally relevant for obtaining the optimal health benefits of Tai Chi Chuan also. Chi follows mind-intent, aimless execution of the form is just that.....aimless.

So, we can begin to comprehend the unique way in which Tai Chi Chuan functions and expresses energy all of which are further elaborated upon when doing sensing-hands and other two-person related practice, such as Ta Lu, San Shou, Pole and Sword play.

Personally, I try to let go, relax and practice the form, everything arises from letting go of tensions, sinking, and the principled and unhurried practice of form. As I see it, placing the mind’s attention in the tan ti’en is the most effective means of “self-defence”.

John: It seems to be just coming about so I’m going with it. On one-hand, I consider myself to be a perpetual student of this art and I enjoy continuously learning Tai Chi Chuan. On the other hand, as we know there is so much tension in the world today so much hustle and bustle, so many fear-based decisions being made. I think Tai Chi Chuan is an antidote to that, as well as being an effective means of promoting good health, healing and mental clarity.

I see it as a healthy thing to do. I would suggest to release and to “let go”, some may say relax, is very much a part of the antidote we human-beings need today. I would like to see a lot more young people take up this art up it has a lot to offer them, it is such an inspiring creative and comprehensive practice for self-cultivation.

John: I wouldn’t say I have any goals per se I think it’s enough to give ourselves the space to do a little better each day. Today, my idea in practicing Tai Chi Chuan is simply to relax, nurture the three treasures (Jing, Chi and Shen), be happy, laugh often and where I can, share a means to obtain good health and well-being with others who may be interested.

I think, Tai Chi Chuan is truly the gift that keeps on giving, with time, sincerity and perseverance in your daily practice anyone can unwrap it.

Darren: Thanks, John, for your time and insightful comments. 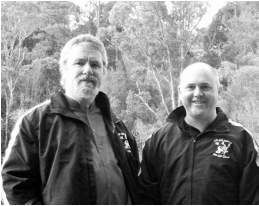